Simply ready for every eventuality

We have had an amazing winter here at Simply Healing, detoxing and relaxing around the log fires with our great guests. And now spring, if we can call it that (ha ha) has arrived; the gorgeous daffodils are in full bloom all around us in the garden. The birds are singing, brightening our day, and the colourful green woodpecker is busy making holes in the apple tree (can you spot him?)…

The white barn owl who lives up the road flies regularly over our fields hunting for his family’s supper. He seems to be quite an exhibitionist, delighting our guests with his displays – and with binoculars and cameras at the ready they have been capturing this rare sight (but quite usual for us): 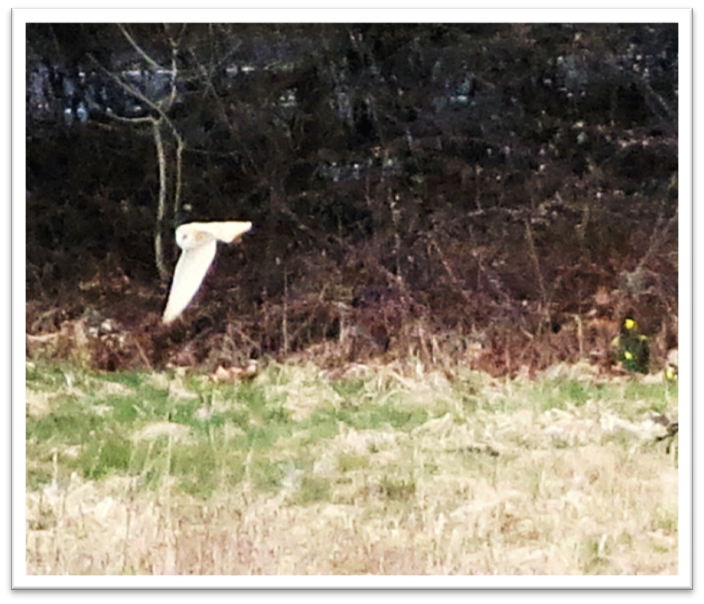 It has made us all more aware of how lucky we are to be living and working in such a beautiful environment. Nature at its best. Now we’re just hoping that the avenue of chestnut trees that line the drive are in recovery.

Fawlty Towers moments at Simply Healing never cease to make us (and our guests) laugh. One guest (who we will not name), who has never had the pleasure of a real log fire, spent her days reading, relaxing and replenishing the fire with logs. Of course we kept a very keen eye on her at first as the logs were a bit precarious. But as time went on she became a master – or so we thought! Before retiring for the night I did my usual check of all the fires, the fire in the main sitting room faintly glimmering. Just by chance Kate and I decided to watch ten minutes of TV. Then we heard the dreaded beep of the alarm. Poor Kate had just made a visit to the bathroom as the alarm control panel started to beep, and not long after, all forty two alarms went full pelt. Kate rushed upstairs to make sure all was well and assembled everyone in the hall. They all came down to the hall in their dressing gowns, with car keys, handbags and coats in tow.

When checking where the problem had occurred, we discovered the main sitting room thick with grey smoke, the result of a log having fallen slightly forward. After reassuring the girls that it was only smoke, myself and Hermione (one of our regular guests) opened all the windows, but still the alarms rang. We then decided to do a fan dance, jumping up and down using brochures and magazines to clear the smoke. Eventually it cleared. Everybody gathered in the hallway and we had such a laugh about the things that they decided to rescue. We spent an hour laughing at how we dealt with the situation – it was a real release.

Kate and I tucked everybody back into bed and reassured them that we would sit up for the next hour until the alarms had settled down. Never a dull moment here at Simply Healing – we really should make a TV series.

Laughter is the best tonic!